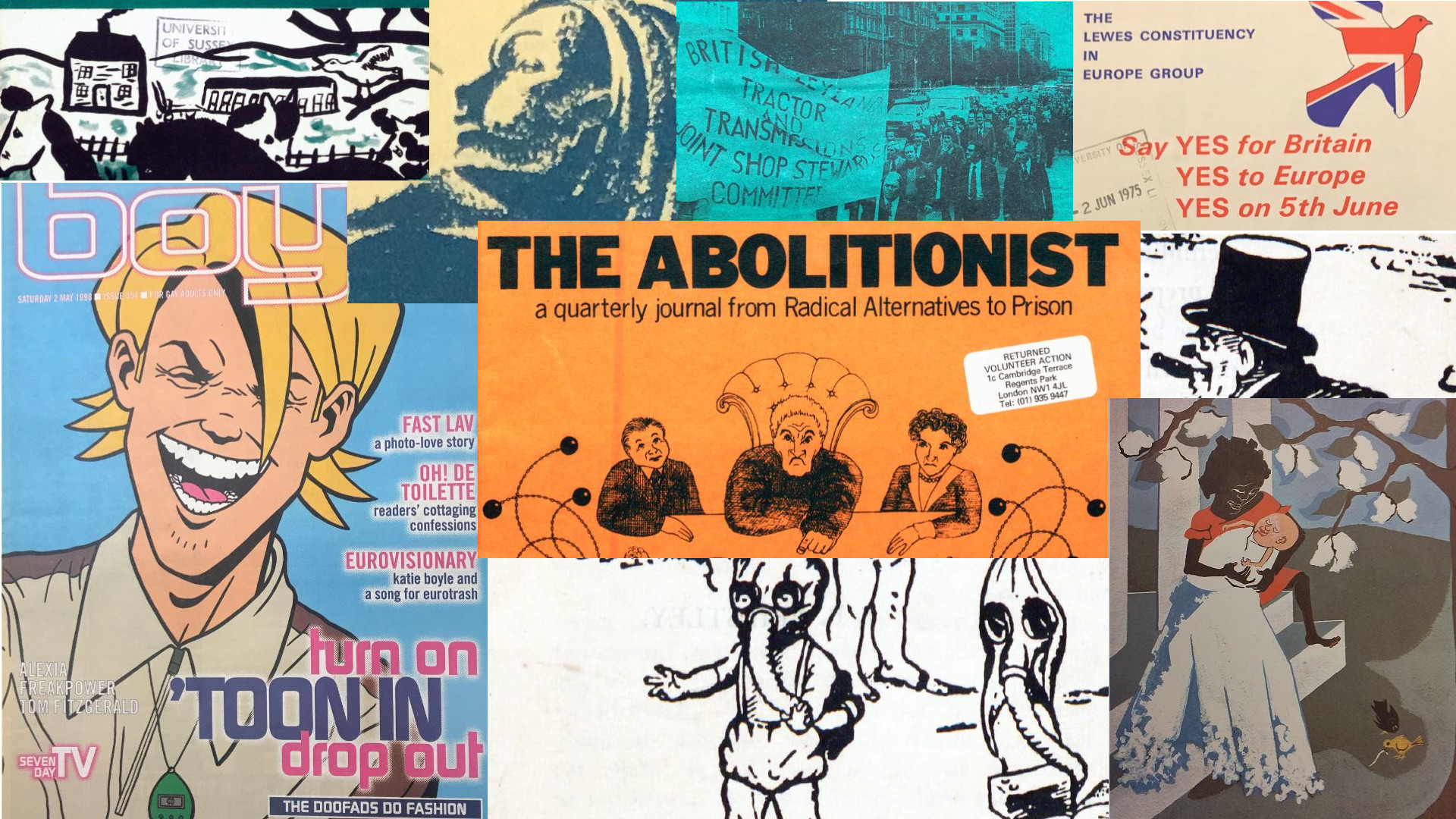 The University of Sussex Legacy Collection is an extensive collection of materials that have significance to the University by way of subject area or association. These materials include:

Runs of magazines and periodicals covering LGBTQ+ culture alongside rarer titles such as the Illustrated London News.

A large and wide-ranging holdings of documents, pamphlets, reports and ephemeral items originating from our original ‘Documents Collection’. This collection was created with the formation of the University in the late 1960s and was a highly regarded pool of material held in the Library to complement the monographs and journals. One of the early librarians involved in setting up and developing this collection, David Kennelly, reflects on his experience:

"Every generation of students and every decade has its own turbulence and witnesses social change. However looking back on those decades of the 60s and 70s at Sussex, I remember excitement, first by being involved in a “new” project into which money was still flowing, and secondly, by the inter-action of world and national politics and the campus. “Les Evenements” hit Sussex in 1968 and there was a Library lockout in later years. Both Asa Briggs and Denys Wilkinson, vice chancellors of the period had difficult contretmps with students and academic staff.

I wanted our Library collections to reflect the mood of the times, and this directed me to the ephemeral publications of the interest groups and pressure groups that were active in those decades. We aimed to collect together the output of such organisations, that represented the current social and political views of the decades. Some publications were standing orders from “regular” sources, political parties, research organisations, etc. Many of the pamphlets we collected were the result of scanning the press and being alert to media reports. Those four little words, “a report out today” were sufficient to raise an order for that report. We also went on regular foraging trips to “known” venues in London, such as 9 Poland Street, where pressure group publications were available for sale.

We also focused on special events, such as general elections and aimed to collect as much material as possible around the event. Our collection of material on the Miners’ Strike of 1984-1985 may be unique in academia.

The Documents Section mounted exhibitions in the Library exhibition area in rota with other Library sections. One I remember was a lovely IUP exhibition to mark the acquisition of those 1000 volumes that could provide in easy format primary material for our 19th century historians. Another was the Votes for Women display of 1978 to mark the half century of the universal franchise.

We issued regular monthly accessions lists to academics and researchers. All strata of the university used the section and several Ph.D. theses and monographs paid acknowledgement to the use of material in the Documents Section."

You will find more details on all of these materials in this guide, but please do also feel free to email us at library.collectiondevelopment@sussex.ac.uk for help and further information about the Legacy Collection. You can also read about the collection in our Special Collections Blog.